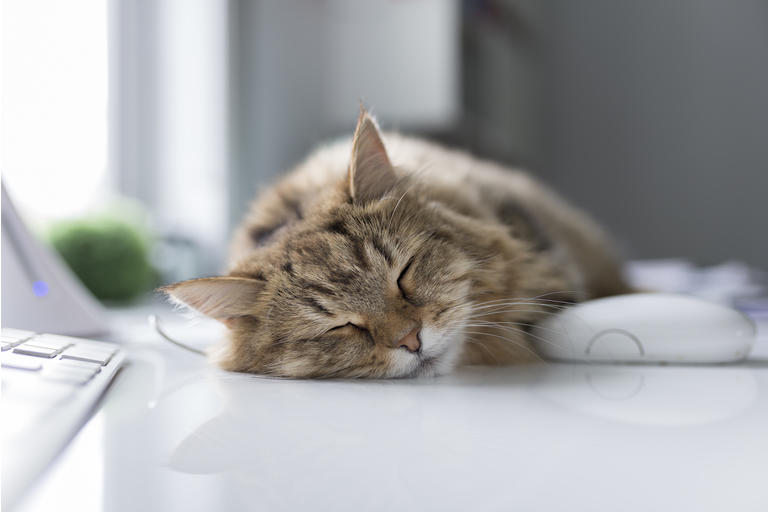 Photo by marieclaudelemay/iStock via Getty Images

Six years ago, we took it upon ourselves to investigate four portfolio recipes that consistently beat Paul B. Farrell’s eight “Lazy Portfolios” in terms of both risk and return. Now that plenty of time has passed – and the events of the past year have unfolded upon the market – we thought we’d revisit the question… and ask a couple more.

Lazy Portfolios: Then and Now

When we talk about “Lazy Portfolios,” we’re referring to a fixed asset allocation that undergoes periodic rebalancing. At RecipeInvesting, we call this a “strategic portfolio recipe,” but you may know it as a buy-and-hold portfolio, static portfolio, or passive allocation. In contrast, a tactical (or dynamic) portfolio changes its allocation over time.

Each of the Lazy Portfolios in question follows an internal theme. While we’re focusing on performance over origin stories, it’s worth noting that these portfolios aren’t a haphazard by-product of some college intern’s investment dreams. Typically, they’re modeled after other standing asset allocations, such as Ted Aronson’s family portfolio.

In this article, we’ll take a look at how each of these Lazy Portfolios performed then against our top picks at the time – and how things have changed in the years since.

When we wrote our original article, we examined the following eight Lazy Portfolios tracked by Paul Farrell, each holding between 3 and 11 Vanguard mutual funds. For ease of reference, we have assigned a RecipeInvesting ID to each portfolio (shown in parentheses).

The goal of our analysis was to see how the Lazy Portfolio compared to our set of 200+ strategic and tactical portfolio recipes. We analyzed them using the following steps.

We started by recreating the exact allocations using Vanguard mutual funds according to Farrell’s specifications. Then, we backtested performance using total monthly returns and rebalancing over a period of 10 years.

Then, we looked at both risk and return over 1- and 10-year spans. We used maximum drawdown (the maximum percentage each portfolio lost in value) as our measure of risk. Total annual return (assuming reinvested distributions) served as our return measure.

Our analysis found that:

From our analysis and risk versus return scatterplots, we found several portfolio recipes that outperformed all of the Lazy Portfolios.

We also noted that the U.S. equity market – represented by our SPY benchmark – generated higher returns with higher volatility. By contrast, the Lazy Portfolios provided moderate fixed income exposure to reduce risks of profit loss against the broader market.

Of the four, VWINX or VBIAX were better choices for those seeking lazy portfolios – in fact, because you don’t have to rebalance the recipes yourself, they’re lazier than the Lazy Eight!

By contrast, tactical portfolios t.cvar and t.loss provided higher returns for those willing to rebalance their recipes monthly.

How Have the Original Four Fared?

But if there’s one thing even the greenest investor understands, it’s that markets are volatile, and clear winners in 2015 can draw the short straw in 2021. To that end, we thought we’d re-evaluate our original “winners” now that we have fifteen years of data (and a pandemic) behind us – and see if any other portfolio recipes have come close to outperforming them in the years since.

Using the same analysis process outlined above, we compared the results in Exhibit A below. Here, you can see how the “winners” (blue squares) fared against the original Lazy Portfolios (yellow diamonds). Once again SPY (purple circle) serves as our benchmark indicator.

Exhibit A: Lazy Portfolios Compared to Prior Winners (15-year Risk vs Return) 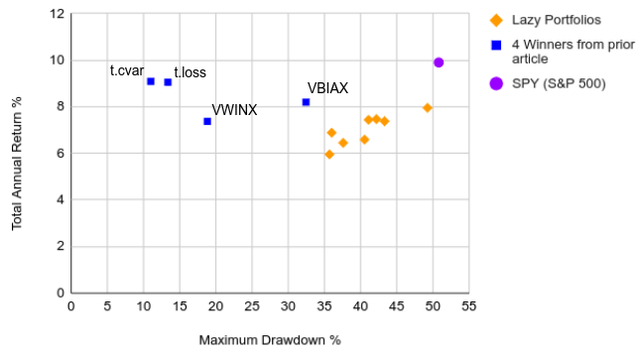 As you can see, three of the four winners still beat every Lazy Portfolio in terms of risk and return, with:

You’ll also note that SPY outperformed all of our portfolios in total. However, SPY’s 10% annual return comes at a much higher risk than almost every other recipe in our analysis. Only one Lazy Portfolio, Second Grader’s Starter, approaches SPY’s brutal 50% drawdown (which occurred during 2008).

Have Any Other Portfolio Recipes Outperformed the Lazy Portfolios?

Armed with a fresh batch of data, we thought we’d explore a second question: have any portfolio recipes have outperformed the Lazy Portfolios in the last 15 years?

We found 40 additional Portfolio Recipes that generated higher return and lower risk than all eight Lazy Portfolios over the past 15 years. These outperformers are highlighted in Exhibit B, below, as green dots. And in fact, many of these recipes outperformed our four winners (blue squares) from last time, too – as well as the S&P 500 (purple circle).

Exhibit B: Lazy Portfolios vs. Other Portfolios with Lower Risk and Higher Return Over 15 Years 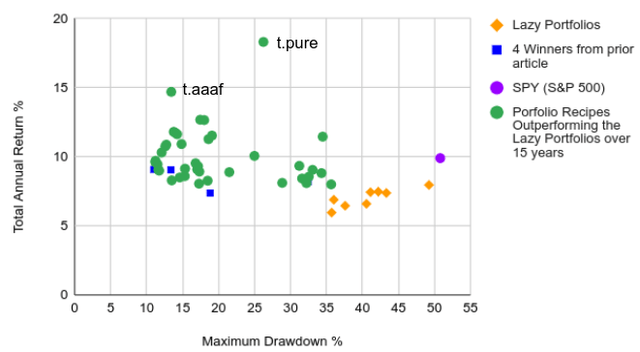 Based on our most recent data, we’re going to highlight six in particular that have performed particularly well.

Numbers 1 and 2: The Tactical Outliers

As you can see in Exhibit B, two portfolios, in particular, blew past the others to excellent returns at surprisingly moderate risk over the past fifteen years. These two tactical portfolios are far from lazy – but their performance is no joke.

The first, Adaptive Allocation F (t.aaaf), is a tactical, DIY portfolio that aims to maximize risk-adjusted returns by responding to market conditions and minimizing volatility. In the past fifteen years, it saw an annualized total return of 14.7% and a maximum drawdown of -13.4%.

The second, Pure Momentum (t.pure), is a tactical, DIY portfolio that seeks returns with an asset allocation algorithm based on recent performance. This portfolio saw an annualized total return of 18.3% and a maximum drawdown of -26.2% over the last fifteen years.

Neither of the above portfolios is “lazy” in any sense of the word. On the contrary: they actively exhibit the potential benefits of monthly rebalancing and a risk-adjusted approach. But for investors seeking a hands-off approach, the following managed Portfolio Recipes are the polar opposite.

The first, Janus Balanced D (JANBX), is a mutual fund that seeks long-term capital growth by investing up to 65% of its assets in equities and the remaining in fixed-income securities and cash equivalents. Over the last fifteen years, JANBX reached 8.9% returns with a maximum drawdown of -21.5%.

The second is the Boston Partners Long/Short Equity Fund Institutional Class (BPLSX). This mutual fund seeks long-term capital appreciation and returns that top the S&P 500 Index by taking long positions in undervalued stocks and short positions in overvalued stocks, with 80% of its net assets in equities. While BPLSX proved one of the riskiest portfolios in our analysis with a maximum drawdown of -34.3% in the last fifteen years, it also hit 8.8% returns.

The third managed fund, FPA Crescent (FPACX), is a risk-driven, tactical mutual fund that strives for a targeted risk level and long-term growth by investing in a variety of securities. Over the last fifteen years, FPACX earned 8.1% in returns with a maximum drawdown of -28.8%.

In addition to the above five tactical portfolios and managed funds, one strategic Portfolio Recipe also beat the original eight Lazy Portfolios in both risk and return: the VizMetrics Permanent Plus Portfolio (s.plus).

As we discovered last time, each of the Lazy Eight portfolios provides moderate diversification and middle-of-the-road performance. But there are plenty of options for investors who want greater returns and lower risk.

Disclosure: I am/we are long EFA, IWM, GLD, TLT, QQQ, SPY, EEM. I wrote this article myself, and it expresses my own opinions. I am not receiving compensation for it. I have no business relationship with any company whose stock is mentioned in this article.

Get FREE, instant access to 275+ Portfolio Recipes, including tactical, strategic, do-it-yourself, and managed.

Recipe Investing is a service of VizMetrics Inc. VizMetrics helps investors and advisers maximize results by providing Portfolio Recipes and tools to choose, invest, and rebalance.